Biomolecular simulations make use of computer programs to recreate and visualize the behavior and phenomena that rule biological processes at the molecular level. These tools make it possible to simulate experiments in more controlled conditions than in cells or living organisms, and to perform “theoretical experiments” that would be technically impossible.

These possibilities have resulted in important advances in biomedicine, facilitating the understanding of mechanisms of diseases and the development of drugs, for example. In the Biomolecular Simulations Laboratory, we apply different molecular modelling techniques and simulations to several problems of biomedical interest, such as the stability of viral particles of Zika and Dengue or interactions between proteins that participate in the contraction of the cardiac muscle. These activities are carried out in collaboration with experimental groups in Uruguay and abroad.

Finally, an important part of our work is dedicated to the development of coarse-grained methods to perform advanced simulations at low computational cost. These methods offer the possibility of improving the comparability of theoretical studies with biochemical / biophysical or molecular biology experiments. 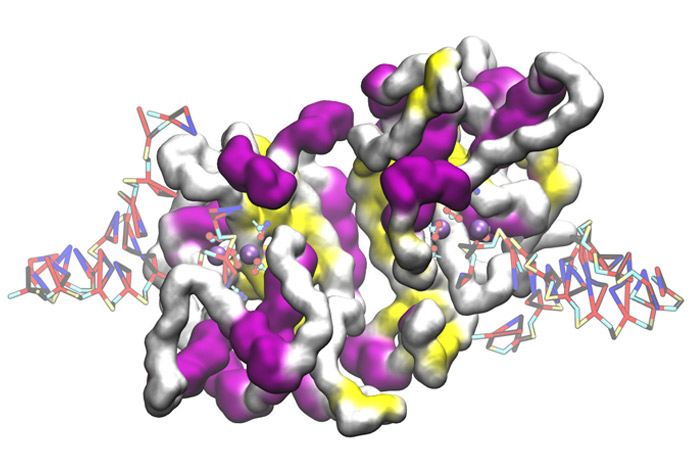 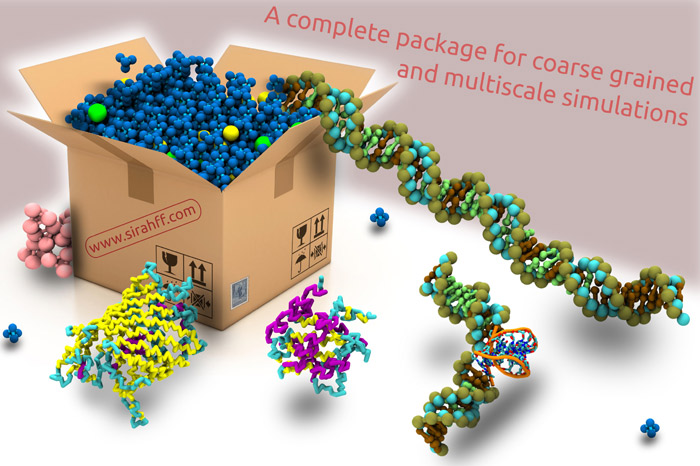 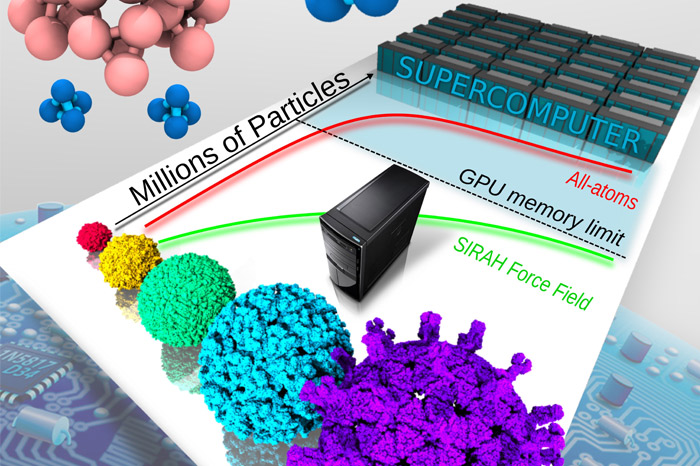 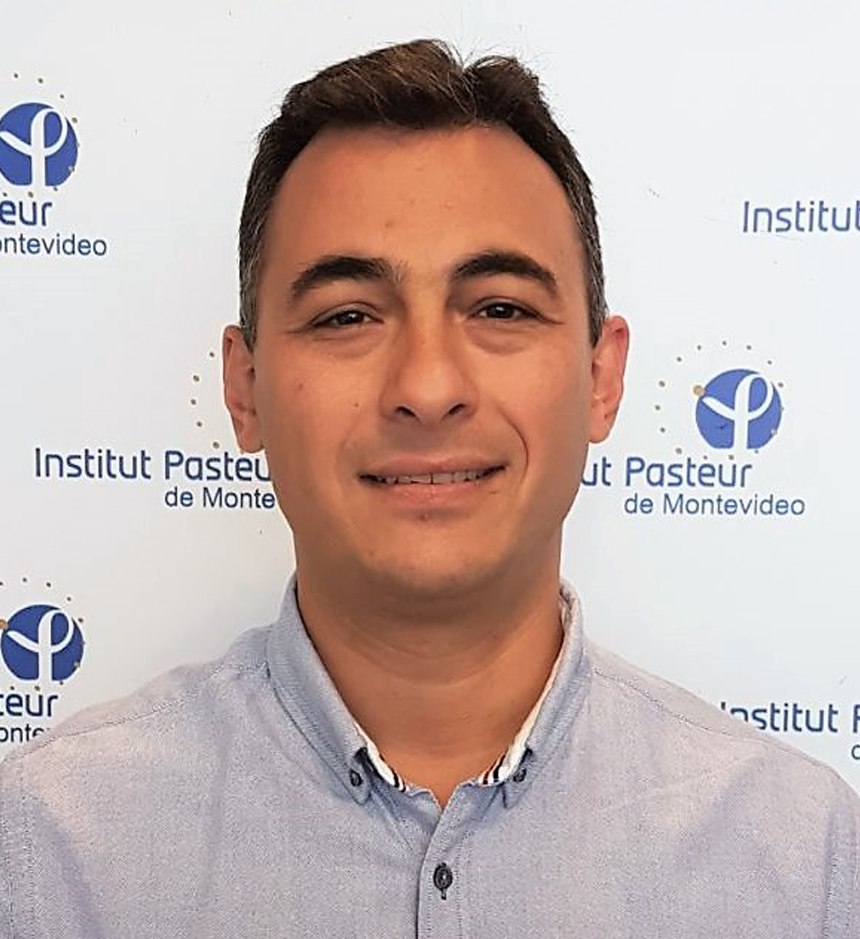 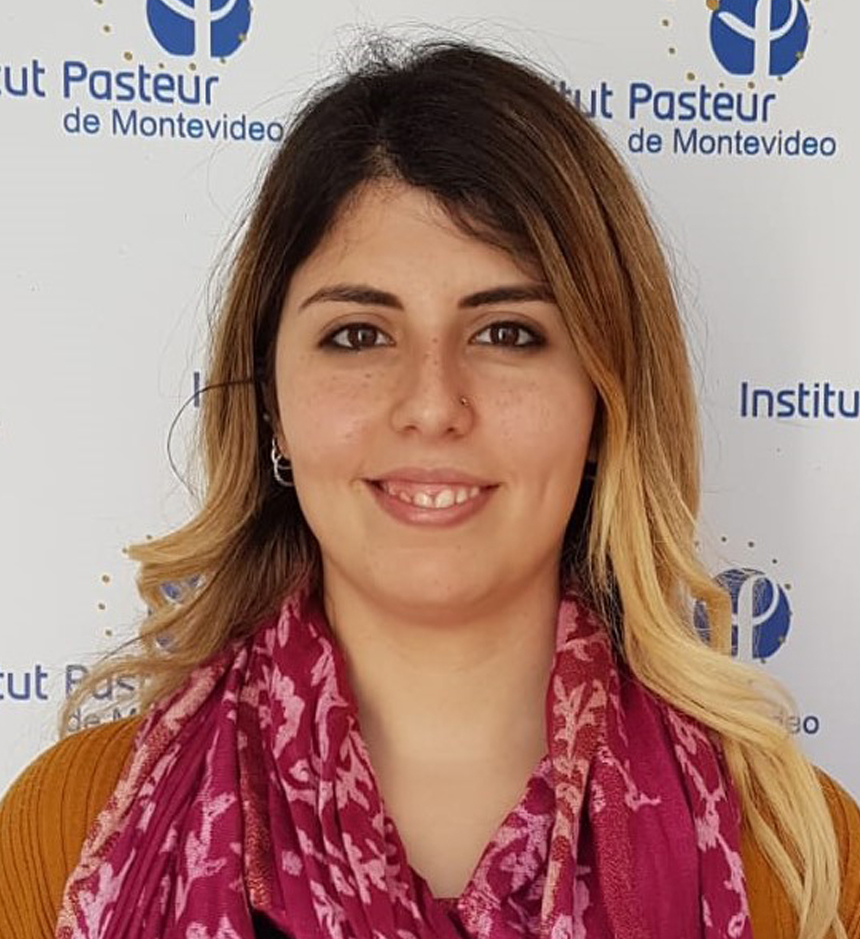 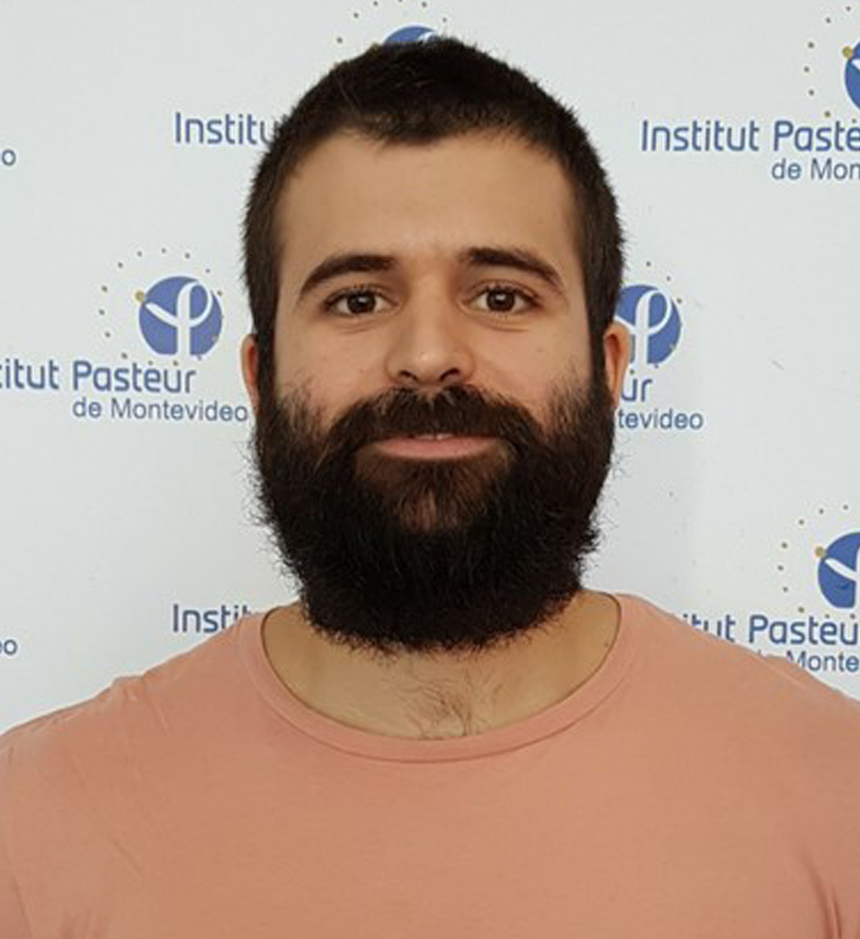 Development of the SIRAH coarse-grained force field (Southamerican Initiative for a Rapid and Accurate Hamiltonian).
Our group develops and maintains one of the broadest coarse-grained force fields for existing biomolecular simulations. SIRAH (www.sirahff.com) uses a Top Down approach and a classic Hamiltonian, common to atomic force fields. SIRAH is freely distributed with easy-to-use analysis tools, parameters and topologies to simulate DNA, proteins, explicit solvent and phospholipids. Currently, representations are being developed for metal ions, glycans and RNA. This line is entirely developed by our group.

Development of FRET sensors for cyclic nucleotide and redox signalling pathways.
Using bioinformatics and structural modelling, together with coarse-grained simulations, we have developed a new generation of FRET sensors for signaling cAMP, cGMP and redox conditions. These biosensors allow us to reach an unprecedented spatial resolution since they can be genetically fused to the C-terminal of virtually any protein, directing them to any cell compartment. This research line continues with the design of new generations of biosensors in the framework of the ProTeMCA program and in collaboration with foreign experimental groups.

Flavivirus stability studies.
Using multiscale simulations, we study the different factors that affect the stability of viral particles (Virus-like Particles). The reduced computational cost of our simulation scheme allows us to perform comparative simulations of different flaviviruses varying the temperature and pH conditions. The availability of experimental structures of viral particles of Zika, Dengue, Japanese encephalitis (JEV) and tick-borne Encephalitis virus (TBEV) allows us to study the accessibility of different epitopes, helping to understand the mechanisms of viral neutralization by antibodies. Additionally, the computational approach enables the identification of amino acids involved in the acid firing mechanism of flaviviruses, which could contribute significantly to the development of vaccines through the creation of attenuated viruses. These studies are part of collaborations with national and foreign experimental groups.

2015-2018 – “Design of biosensors for simultaneous monitoring of redox signaling and cAMP: From the computer to the cell and back to the computer”. Responsible: Sergio Pantano. Fondo María Viñas, ANII.