The Laboratory of Molecular and Structural Microbiology (LMSM) seeks to understand how bacteria sense signals from their environment and internal milieu, to thereafter respond and adapt. Pathogenic bacteria are a particular interest, focused on the Spirochete genus Leptospira.

Signaling is mediated by proteins, which change their 3D structures in a signal-dependent way, structures that are often stabilized by phosphorylation. Phosphoryl-transfer along such signal transduction pathways is thus a key enzymatic reaction, the mechanistic features of which our lab wants to uncover at the molecular level. Our lab uses X-ray crystallography, to image the 3D structures of target proteins, such as sensory histidine kinases and response regulators, alone and in complex.

By combining these high-resolution images with other sources of information —especially issued from biochemistry, genetics and microbiology experiments— we wish to understand the function and then contribute to the development of applications, such as vaccines against microbial diseases.

The Leptospira genus comprises many species, at least 10 of them cause a serious disease: leptospirosis. This zoonosis (that is, a disease that transmits from animals to humans), affects the reproductive capacity of cattle in Uruguay. It also causes an acute disease in humans, sometimes deadly, for which there are still no effective vaccines. Signaling systems in Leptospira shall uncover virulence and pathogenesis mechanisms, still poorly understood in these spirochetes. Key virulence proteins will be attractive targets to develop intervention strategies, and effectively control the zoonosis, with anticipated veterinarian and public health applications. 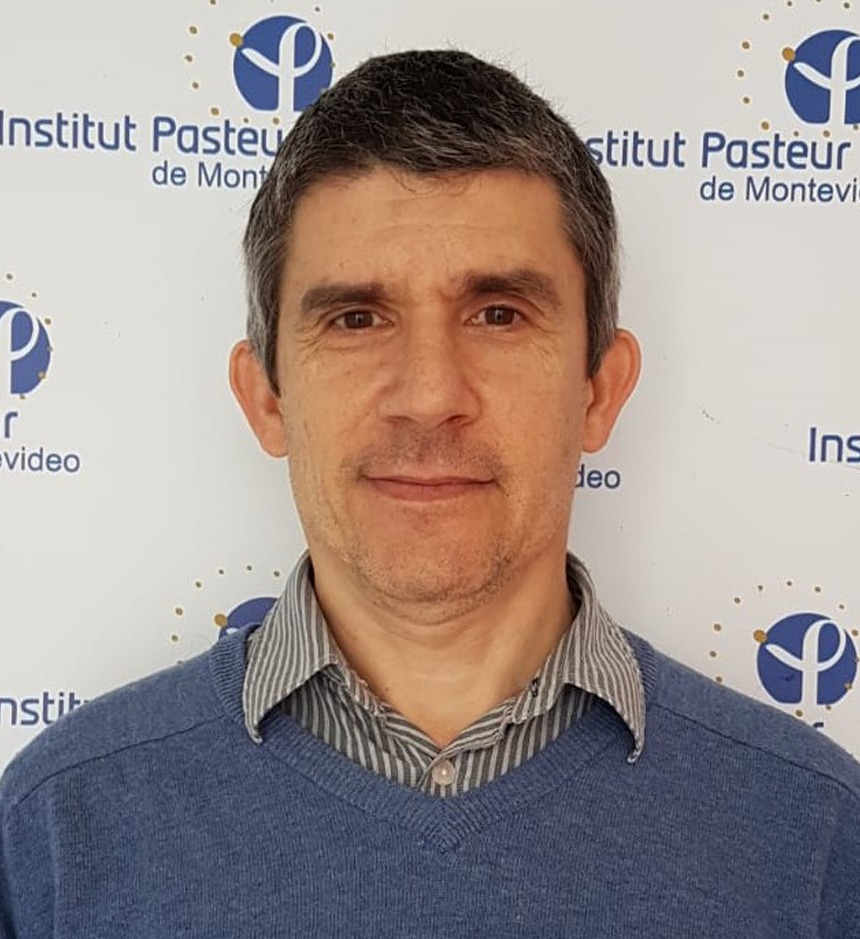 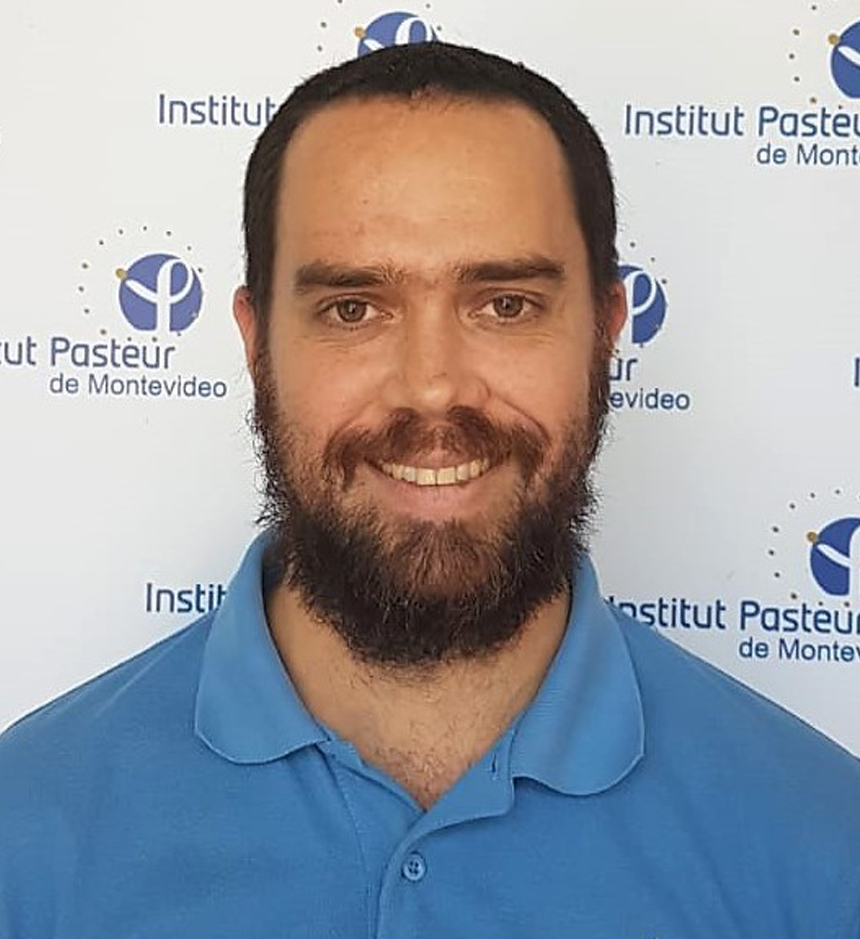 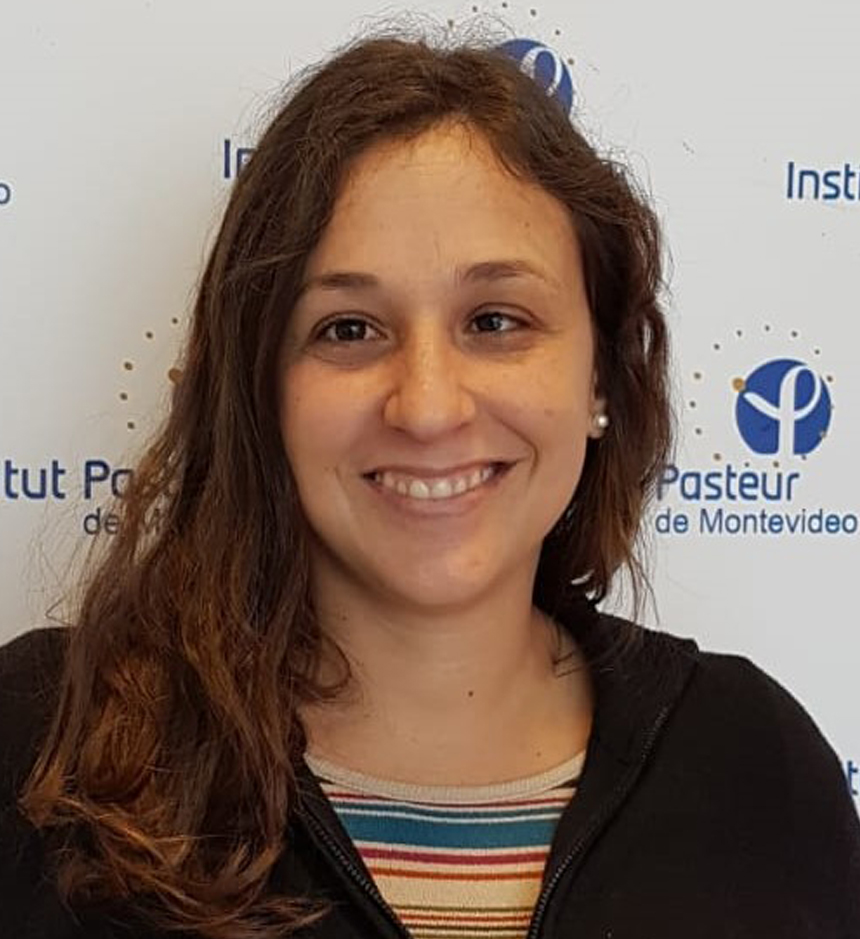 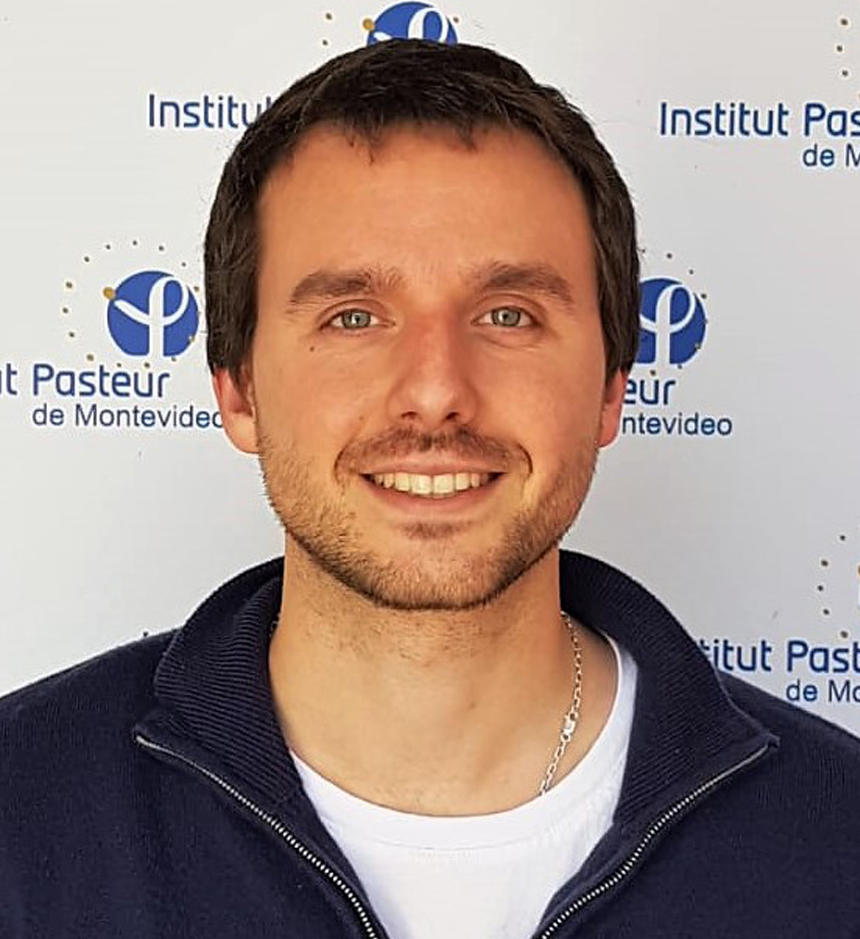 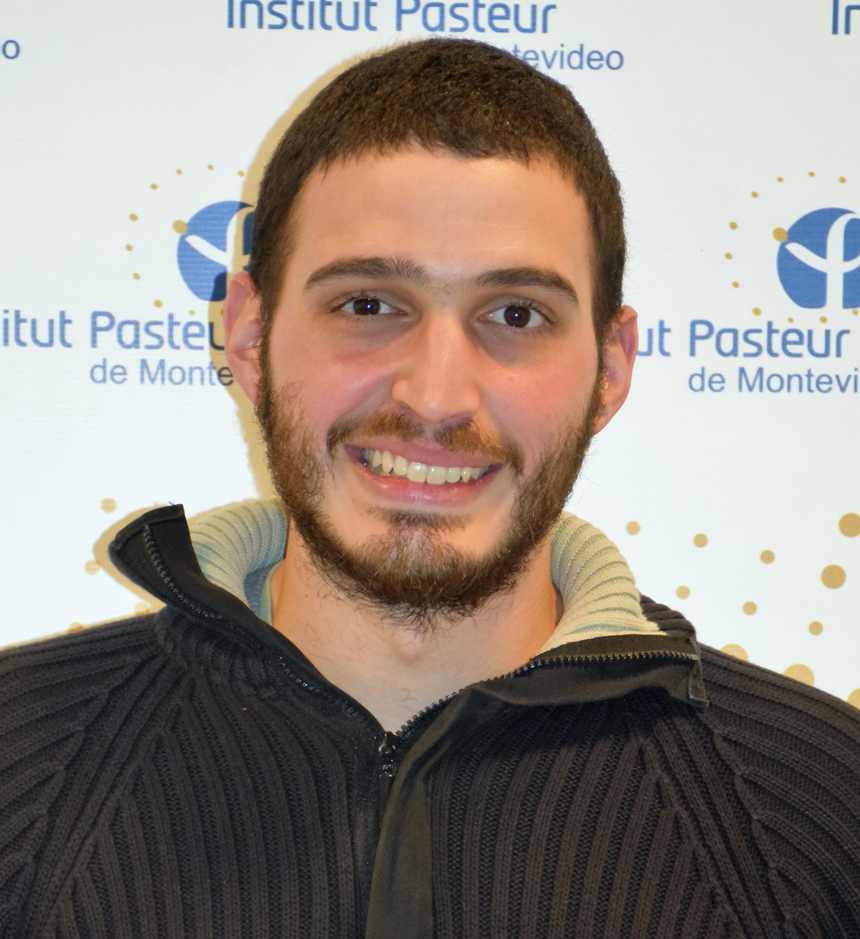 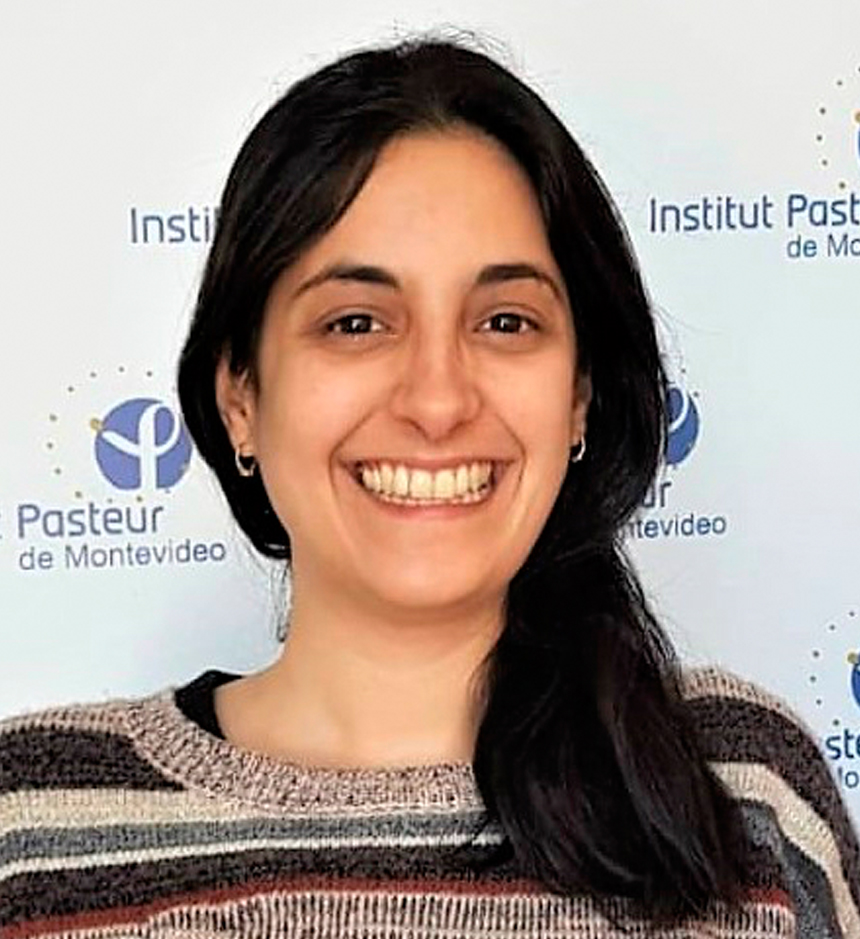 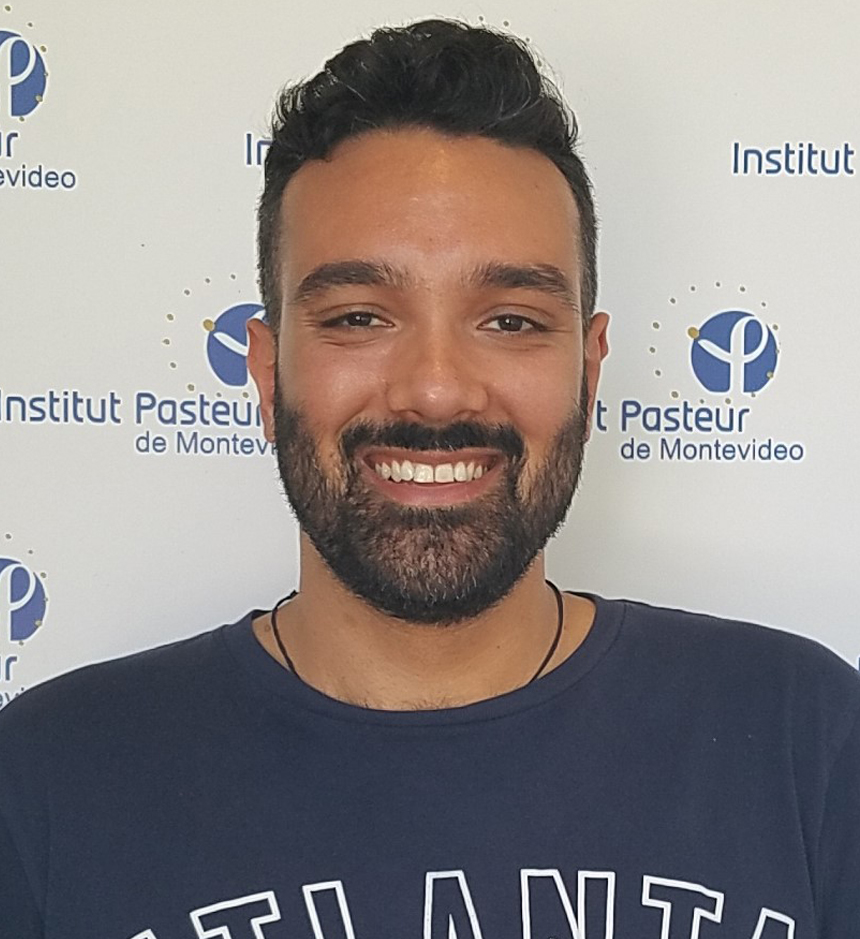 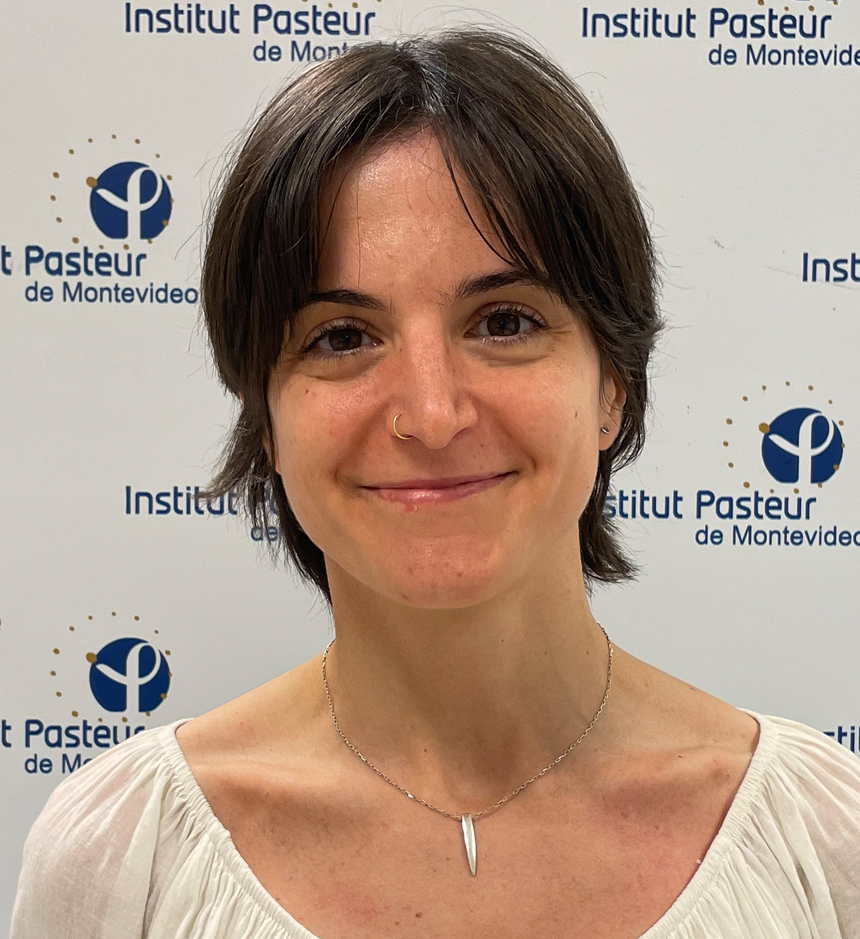 Molecular and structural biology of Leptospira
Different species of Leptospira cause leptospirosis. This zoonosis is the most widespread one around the world, reemerging as an important problem in human and animal health. In Uruguay, it is a significant issue, provoking cattle abortions and reproductive failure, and transmitting to humans causing acute disease. Our lab wants to elucidate the molecular mechanisms that determine and/or regulate virulence and pathogenicity in Leptospira. There are currently two main projects to do this: the study of the motility apparatus and systematic efforts to isolate and type local Leptospira strains in Uruguay.

i- The motility apparatus of Leptospira. Active translational motility of leptospira (swimming) is central for the virulence of the pathogenic species that cause leptospirosis. The essential organelle used for swimming is the flagellum. Our lab is currently studying the detailed molecular architecture of the flagellar appendage. The filament of these spirochetes’ flagella is confined within the periplasm, a unique feature shared by all Spirochetes, including bacteria like Treponema pallidum (the agent of syphilis) or Borrelia burgdorferi (Lyme disease). In collaboration with the Ko and Sindelar labs in Yale University, as well as the Picardeau lab at the Institut Pasteur (Paris), we have shown that the flagellar filament from Leptospira is much more complex compared to better-known bacterial models used so far as a paradigm of swimming motility in bacteria. As an example, filaments from Salmonella and other Enterobacteria are built as homopolymers of a single protein species (flagellin), whereas Leptospira comprise at least eight different proteins polymerized into the periplasmic filament assembly (Wunder et al., Mol Microbiol 2016, 101: 457; San Martin et al., Acta Crystallogr F 2017, 73:123; Wunder et al., Front Cell Infect Microbiol 2018, 8:130). We have recently crystallized two new proteins from both pathogenic and saprophytic Leptospira spp. (San Martín et al., Acta Crystallogr F 2017, 73:123),and solved their 3D structures (unpublished results), revealing novel protein folds. We are now moving forward towards their physiological interactions and interaction partners, enabling for the flagellar filament role in spirochete motility.

ii-Isolation and typing of autochthonous Leptospira spp. strains. This line is being developed in the context of a multicentric collaborative project, aims to isolating native strains from Leptospira spp. from biological samples obtained from infected cattle and other animal reservoirs. These isolates are typed by complementary techniques: classic serologic methods and novel molecular approaches, ultimately achieving greater sensitivity and specificity (Zarantonelli et al., PLoS Negl Trop Dis 2018, 12:e0006694). This effort has led to the creation of a biobank of strains of Leptospira, which up to now was not available in Uruguay, reporting the identity of the serovars that circulate in natural infections. This biobank will be useful in the formulation of more efficacious vaccines, in the improvement of diagnostic methods, as well as in further investigations of leptospirosis in Uruguay.

2016-2019 – Design and production of new variants of the follicle stimulating hormone (FSH) for its use in species of productive interest. Participation: researcher.