At the Immunovirology Laboratory, we study the cellular and molecular processes involved in leukemic transformation by oncogenic viruses. In particular, we work with the Enzootic Bovine Leukemia (LBE) caused by the Bovine Leukemia Virus (BLV), which has a high prevalence in dairy cattle, generating important economic losses for our country.

With the aim of elucidating the mechanisms involved in viral infection, we have analyzed the genetic variability of BLV in Uruguay comparing their circulating genotypes with those described in other countries. We have characterized at the molecular and structural level the main BLV proteins: the glycoprotein of envelope (ENV), capsid (CA) and protease (PR). Also, we studied the interaction between these proteins with different components of the infected cell.

Also, using transcriptomic analysis, we studied the differences of gene expression between infected and non-infected animals with BLV, to know possible mechanisms involved in the control of the infection.

The knowledge we have obtained of this pathology and its causal agent has also allowed us to develop new technologies for the diagnosis both serologically and molecularly, as well as the generation of immunogenic preparations from the viral proteins that are being tested in animal models.

The results of our work will allow us to better understand the mechanisms that cause the leukemic transformation, generating new tools to optimize its diagnosis, and new procedures to improve the control and prevention of viral transmission. 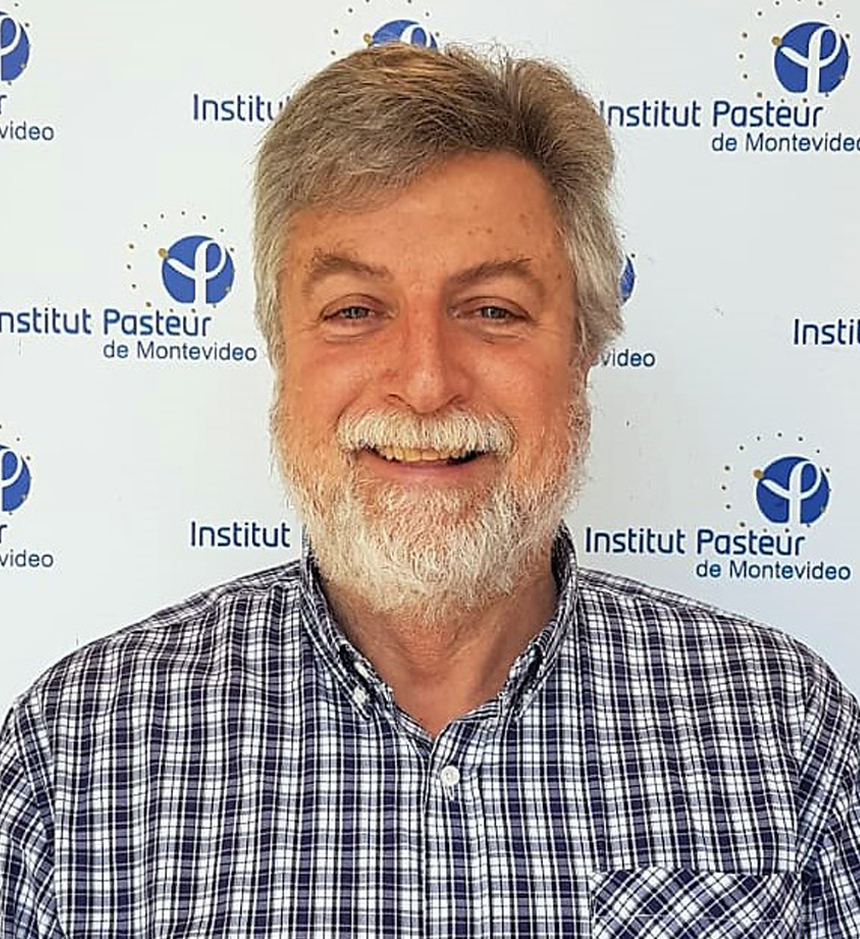 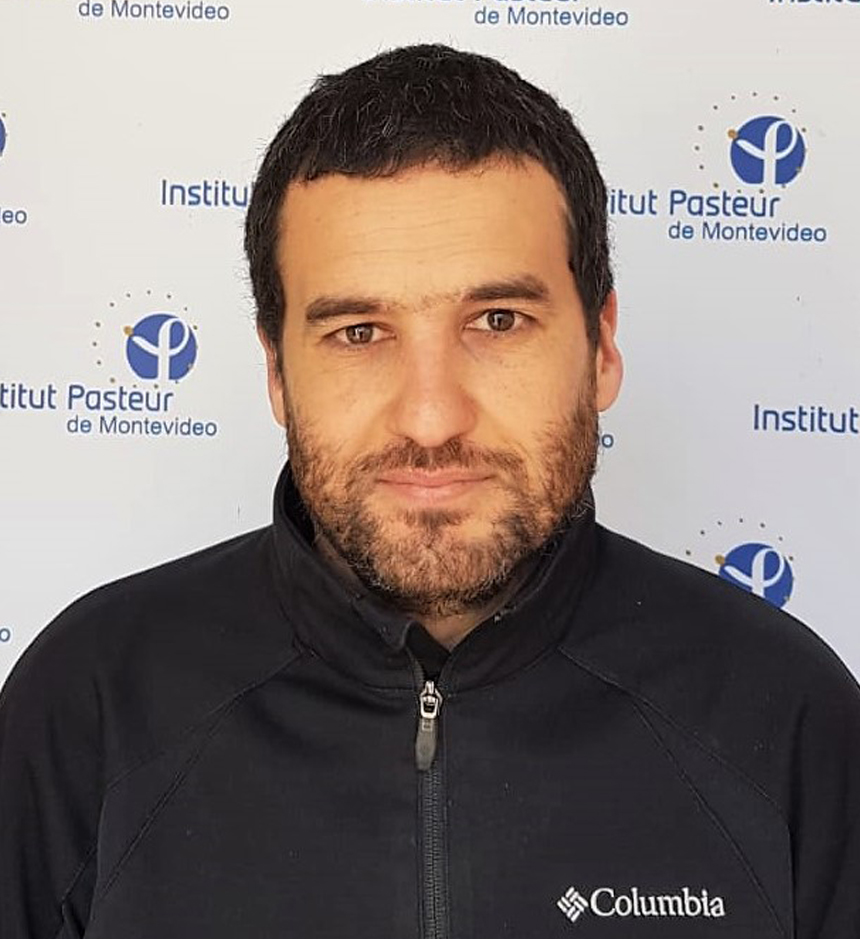 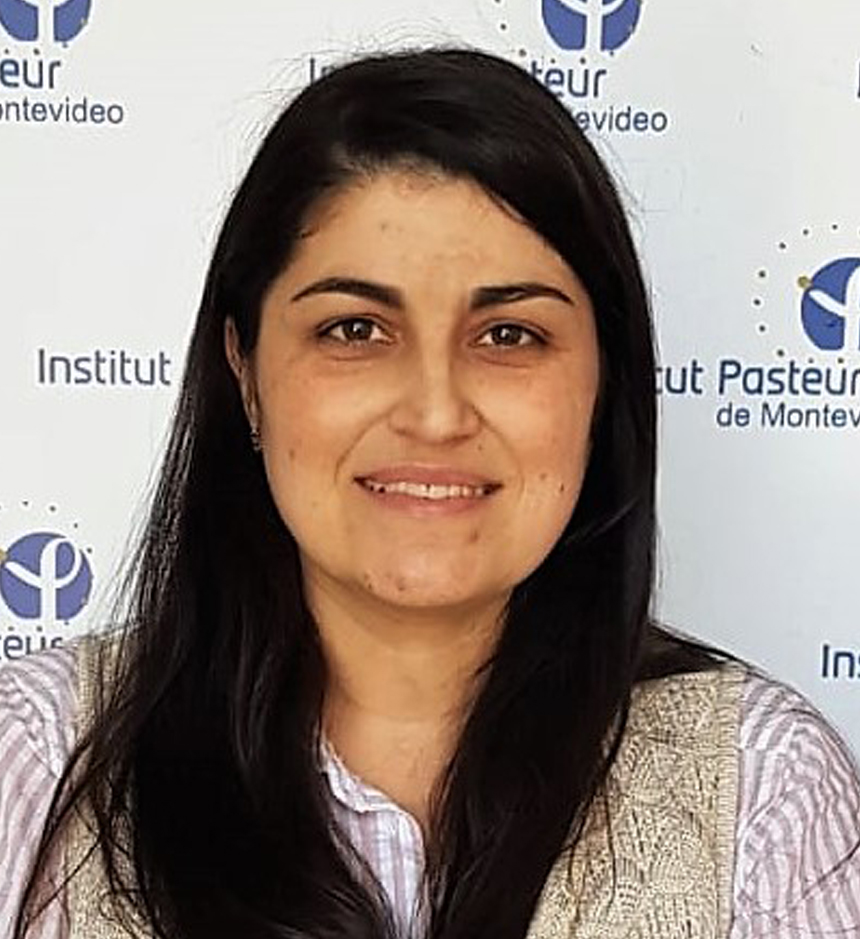 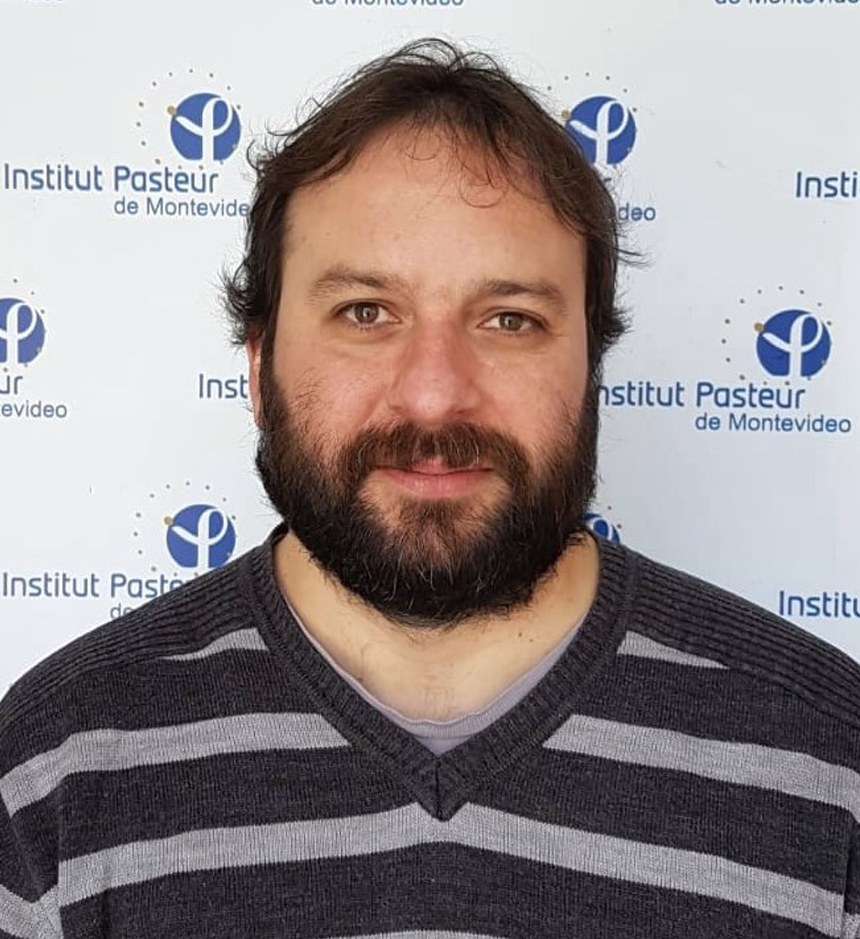 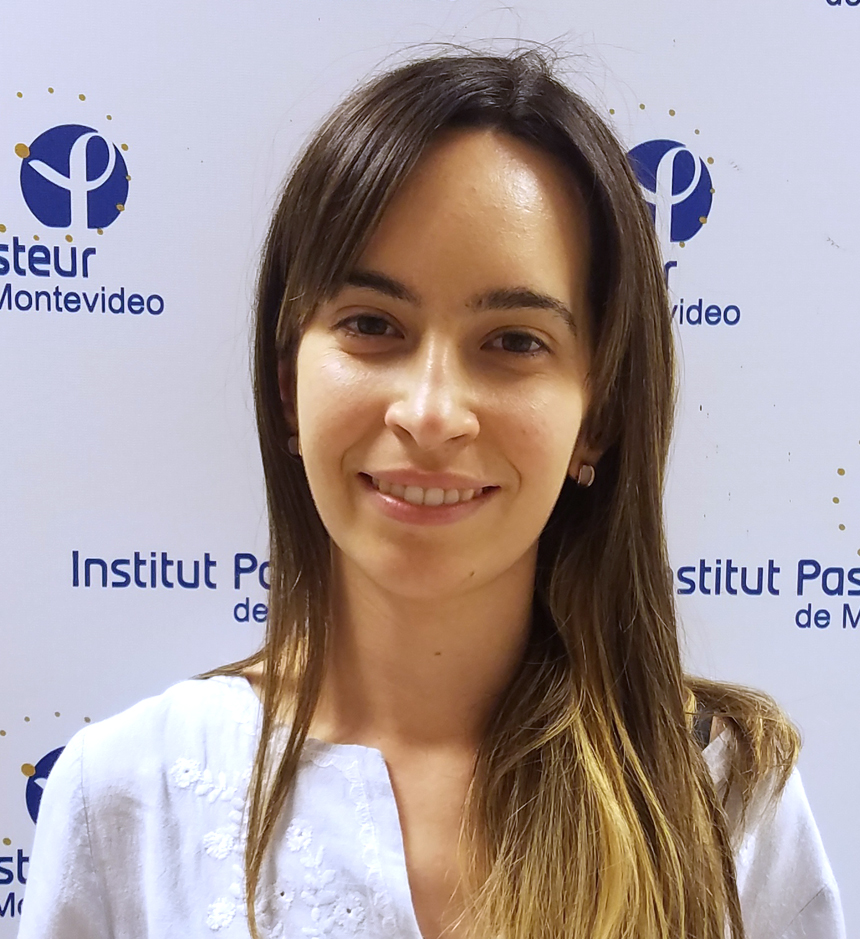 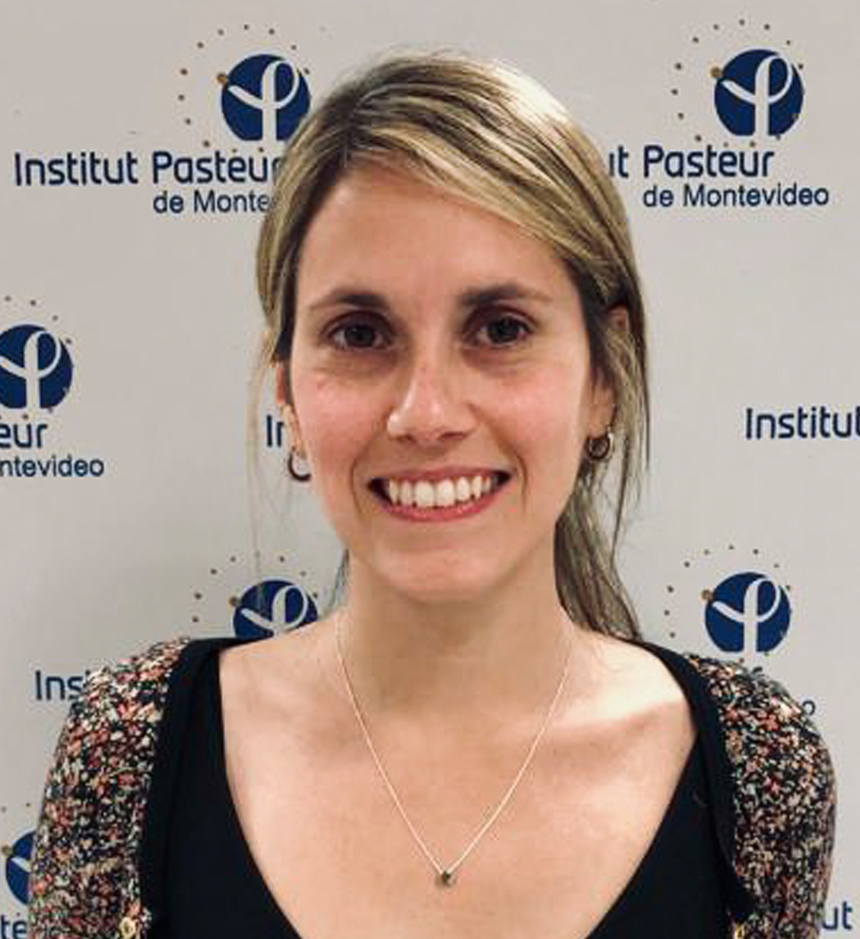 Biophysical and structural characterization of the BLV capsid protein (BLV-CA).
The mechanism of BLV capsid formation through the self-assembly of thousands of copies of BLV-CA represents a key event in the retrovirus cycle. To understand this mechanism we have characterized the biochemical and biophysical properties that affect this process, and in collaboration with the Laboratory of Molecular and Structural Microbiology of the IPMontevideo we elucidate the three-dimensional structure of BLV-CA, showing that it is organized in a pseudohexagonal with an important conformational plasticity. On the other hand, we generated nano-antibodies directed against the viral capsid and we studied the effect of the interaction with capsid on the modulation of self-assembly.

Characterization of the interactions between BLV-CA and intracellular components of the host cell.
The transit of the viral capsid between the plasma membrane and the cell nucleus depends on the interaction with various cellular proteins. Other retroviral models have described restriction factors that disturb the conformation of the capsid generating anti-viral conditions. For the case of delta-retroviruses such as BLV we have no confirmed evidence on these mechanisms. In the HIV model it has been demonstrated that the interaction between capsid and nucleoporins would participate in this transit and in the entrance to the nucleus through the nuclear pore. Based on the ability of BLV-CA to self-assemble in vitro in tubular or supramacromolecular structures, and using affinity and mass spectrometry techniques, our objective is to identify and characterize the interactions between BLV-CA and the factors of the cellular guest involved in this traffic. We will also look for partners of BLV-CA that can act as innate immune sensors when analyzing cell lysates of permissive and non-permissive cells to BLV infection. The engineering cells generated by Francesca Di Nunzio in IP Paris will be used to identify new restriction factors or functional viral partners by mass spectrometry. We will also design and purify nanobodies against BLV-CA that will be labeled as microscopy approaches. The results obtained in BLV will then be transferred to the HTLV-1 research to define common and diverse mechanisms adopted by these delta retroviruses when establishing the viral infection.

Biochemical, structural and immunological characterization of the BLV envelope protein.
The env of BLV has a crucial role in the determination of viral infectivity, and is responsible for inducing the fusion of viral and cellular membranes after recognition of specific cell surface receptors.
We optimized the expression of soluble env ectodomain in Drosophila S2 cells, with a natural and altered furin cleavage site. We induced protein expression and secretion in the supernatant by divalent metals, and we performed protein purification by affinity chromatography using a StrepTactin column followed by size exclusion chromatography. The quality control of the proteins was evaluated by mass spectrometry. This system should allow the production of sufficient material for crystallization assays, cryo-electron microscopy of isolated trimer and biophysical studies of the multimeric complex formed by the recombinant proteins.
Env is one of the main targets of antiviral immune responses, which generate both humoral neutralizing antibodies and T-cell specific adaptive immunity. Other retroviruses have been reported to be the presence of an immunosuppressive peptide (isu) in the structure of the glycoprotein Env. It could be important in its ability to immunomodulate immune responses. We are interested in studying the effect of amino acid modifications in the isu domain on humoral and cellular adaptation responses to the challenge with modified Env glycoproteins. This will allow us to understand one of the mechanisms involved in the generation of resistance used by BLV to escape the antiviral immune response. On the other hand, we also hope to identify the modifications that reduce the immunosuppressive activity of this domain and, therefore, increase its immunogenicity. This result could be useful for the rational design of effective vaccines against this retrovirus.
Using BLV Env purified protein we have also developed a new ELISA test to use it for the diagnosis of enzootic bovine leukosis. In collaboration with ATGen we are now generating a new EBL diagnostic kit that will be used in a field experiment with more than 50.000 dairy cows.

Genetic characteristics identification associated with the Enzootic Bovine Leukemia (LBE) natural control.
Given the high prevalence of Enzootic Bovine Leukemia (LBE) in Uruguay, the strategy to eradicate the disease implemented in Europe and Oceania is impracticable in our country. An alternative control strategy using vaccines is promising, but there are still no effective products on the market. Considering that recent results show that the LBE has a hereditary component that reaches 8%, a third strategy to control the disease would involve the herding of flocks by increasing the frequency of genotypes associated with resistance to infection.
In an experimental herd with high prevalence of BLV infection, we have analyzed a the groups of animals: one control group characterized by a low proviral load and low titers of anti-BLV antibodies; one “non-control” group with high proviral load and high specific antibody titers, and a “negative” group, without detectable presence of BLV.
Using peripheral blood mononuclear cells (PBMC) from these animals, we are characterizing, in collaboration with Natalia Rego and Hugo Naya of the Bioinformatics Unit (IP Montevideo), the transcriptomic representatives of these groups by mass sequencing of mRNA (ARNseq). We hope to identify genes and isoforms differentially expressed in control animals and interpret these differences in the context of biological processes, ontologies of sub or overrepresented metabolic pathways.

2015 – 2018 – Determination of the proviral load of enzootic bovine leukosis (BLV) by Droplet Digital PCR and interference of the virus with the immune response against pathogens of reproductive interest. Sectoral Fund for Animal Health.