For the first time, the Imaging Scientists program of the Chan Zuckerberg Initiative (CZI) — a philanthropy created by Dr. Priscilla Chan and her husband Mark Zuckerberg — has awarded a coveted grant to a Latin American scientist, the Uruguayan researcher PhD Leonel Malacrida.

Malacrida is a Principal investigator at the Institut Pasteur of Montevideo (IP Montevideo) and Associate Professor at the Universidad de la República de Uruguay (in the Hospital de Clínicas). He will receive $370,000 funding for five years to support his work in the development of an Advanced Bioimaging Unit (ABU), which will be a national facility that seeks to advance opportunities for Uruguay researchers in the areas of advanced microscopy and biophotonics.

Imaging molecules, cells, and tissues is critical to biomedical research and for clinical practice, since such imaging enables scientists to better identify, understand and treat diseases. However, new progress in the field of imaging depends on the development of novel instrumentation, advanced microscopy methods and software developments, and increased collaboration and sharing of these technologies — which is what CZI’s Imaging Scientists program seeks to promote through their international call to support researchers in a five-year program.

This year, CZI has supported 22 imaging scientists representing 11 countries with $17.5 million. CZI previously funded 17 Imaging Scientists in the United States. The proposal that Malacrida presented to the international call was the creation of the ABU, which is a shared effort between the IP Montevideo and the Universidad de la República de Uruguay (Udelar), with the aim of creating a national laboratory that develops and provides access to cutting-edge imaging technologies and methods to Uruguay and all regional communities.

The ABU — which will be inaugurated in the IP Montevideo this month— will work as a joint unit between the IP Montevideo and the Physiopathology Department at the Hospital de Clínicas from Udelar. This unit will develop technologies in two main areas: Advanced Microscopy and Biophotonics. Advanced instrumentation will be built having time-resolved and hyperspectral imaging capabilities and with detection systems that enable research ranging from traditional photon-counting methods to single-molecules experiments using Fluorescence Fluctuations Spectroscopy (FFS).

The projects will feature two multiphoton microscopes. One microscope will be based on the 780nm fibre system by Calmar with photon-counting detection and FLIMbox electronics for FLIM and FFS capabilities; set up on a Nikon Ti-S equipped for both in vivo cell and intravital imaging. The second microscope is intended for deep-tissue imaging with a unique detector designed for imaging within highly scattering samples and capable of harmonic generation experiments. This instrument is known as the DIVER microscope (Deep Imaging Via Emission Recovery); it uses a state-of-the-art multiphoton laser (MaiTai DeepSee eHP – Spectra-Physics). It will carry out FLIM and is extremely sensitive to harmonic generation (Second and Third Harmonic Generation), and also features a large field of view due the custom-designed scanning optics. FLIM measurements are done in DIVER as well as in two epi-detectors using the lastest generation FLIMbox by FLIMLabs.

The second area of research and development is related to fibre optic-based devices for research and biomedical applications. In particular, the UBA is focused on pulsed UV-Lasers combined with fibre optics to study intravital metabolic signatures and using the probe as a scanner. Besides, the UBA is developing a new kind of NIRS device for oximeter and metabolic studies in tissue. One of the most important premises of the UBA is to use the information available in the tissue without including extrinsic labelling or clarification, for example using intrinsic NADH or FAD fluorescence for metabolism. Malacrida believes that the combination of cutting-edge technology and new artificial intelligence approaches are fundamental for improved interpretation of the increasingly important volumes and complexity of data his instruments and methods produces. Since the democratization of knowledge and technologies are fundamental for the CZI Imaging Scientists program, Malacrida has a strong commitment to the new generation of young scientists training in these modern instruments and methods, which are not readily available in the region due to the limitations in access and the extreme cost.

With this generous funding, Malacrida plans to enhance the work of the ABU with qualified human resources, and to keep developing training courses and scientific congresses focused on the advanced techniques within his area of expertise. He also seeks to develop a community of like-minded researchers to share experiences and equipment to support Uruguayan and regional scientists. A key aspect of this initiative will be to share all the opportunities the UBA will bring to the country following important principles as regards data sharing and good practices in terms of efficient management of the facility. This approach will facilitate the horizontal interaction between the various scientific institutions in the country.

As a graduate in Biochemistry from the Faculty of Sciences of the Udelar, Malacrida began working with advanced bioimaging during his PhD in biophysics in Uruguay. His research focused on the study of pulmonary surfactant, a biofilm that covers the lung interior and which enables us to breathe. During his thesis he wanted to understand this biological material at the molecular level. Later, during his postdoc in the Laboratory for Fluorescence Dynamics at the University of California, Irvine, he explored the opportunities offered by the advanced microscopy to quantitatively investigate several biological problems.

Malacrida is particularly interested in developing instruments and methods for imaging spectroscopy to understand cell metabolism within deep layers inside live tissues that are not accessible with regular microscopes.

In addition, together with PhD Andrés Kamaid, Malacrida is promoting the creation of a Latin American advanced microscopy network that could be established in 2021 after a foundational event that will be held in Montevideo and with the participation of microscopy leaders from all Latin American.

About the Chan Zuckerberg Initiative and CZI’s Imaging Scientists program

Founded by Dr. Priscilla Chan and Mark Zuckerberg in 2015, the Chan Zuckerberg Initiative (CZI) is a new kind of philanthropy that’s leveraging technology to help solve some of the world’s toughest challenges — from eradicating disease, to improving education, to reforming the criminal justice system. Across three core Initiative focus areas of Science, Education, and Justice & Opportunity, we’re pairing engineering with grant-making, impact investing, and policy and advocacy work to help build an inclusive, just and healthy future for everyone. 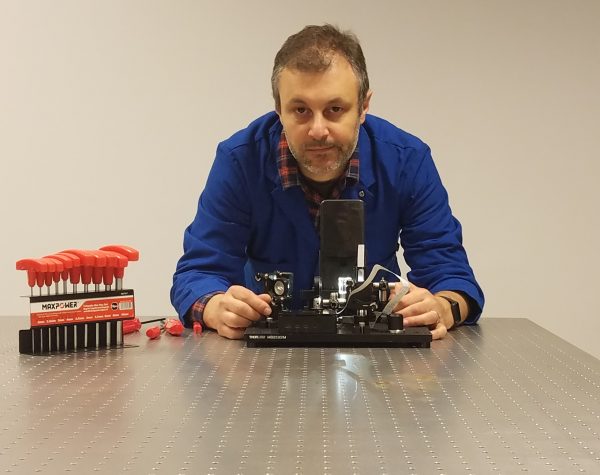