Since the end of 2020, Nature has been publishing about the work of several Institut Pasteur de Montevideo’s (IP Montevideo) researchers. From gut microbiome, the RNA and parasites to rare diseases and a local PCR test… All of these studies, done by Uruguayan scientists, were highlighted by the prestigious magazine, that has its eye on local science.

In the first week of March, the IP Montevideo’s researcher Lucía Spangenberg was mentioned by Nature in its section ‘Where I work‘. In the article, the bioinformatician told about how her research is trying to make genetic sequencing available to anyone who needs it. 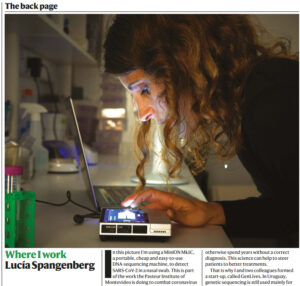 For example, her work has a huge potential to help people with rare diseases, as they usually spend years without a correct diagnosis. In this way, Bioinformatics might be a solution for those patients to get better treatments. That is why Spangenberg, and other two colleagues, founded a start-up called GenLives, so everyone who need it can access genome sequencing.

On the other hand, she and her team have been analysing DNA samples from all over Uruguay to detect clusters of SARS-CoV-2 and its variants.

Earlier this year, Gregorio Iraola‘s research was also highlighted by Nature. The head of Microbial Genomics Laboratory at IP Montevideo studies focus mainly on understanding the gut microbiome and how it varies between populations to help treating different diseases. 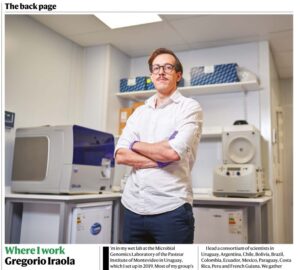 According to Iraola, the existing data bases about human microbiome are from wealthier countries (specially from North America, Europe and China). Thus, these cannot be used to make reliable medical decisions about gut health of a Latin American person.

In this context, the researcher is in charge of Latinbiota, a scientific consortium in Uruguay, Argentina, Chile, Bolivia, Brazil, Colombia, Ecuador, Mexico, Paraguay, Costa Rica, Peru and French Guiana, which aim to gather information about microbiomes in these countries in order to assemble the Latin American puzzle.

A close-up on T. gondii

Another featured Uruguayan scientist on 2022 was María Eugenia Francia, who was also mentioned on Nature’s ‘Where I work’ because of her work with Toxoplasma gondii, a type of parasite that causes visual problems on babies. 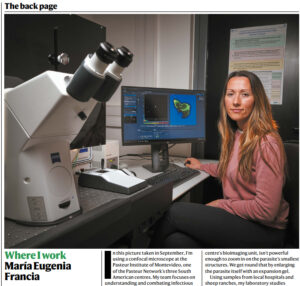 This parasite belongs to the group Apicomplexa, which gives name to the laboratory led by Francia at IP Montevideo: Apicomplexan Biology Lab —the researcher is the only female scientist to be in charge of a G4 lab at the institute—.

This team also studies another parasite from that group that causes neosporosis. This disease leads to massive abortions in cattle, which is why it is a great economic threat to agricultural sector in the country. As Francia told Nature, in Uruguay there are more sheep than people, so that is why it is a big concern.

Last year, it was the turn of Juan Pablo Tosar, a researcher from the Functional Genomics Laboratory at IP Montevideo.

Nature remarked on Tosar’s group work about cellular communication generated by extracellular RNA. According to the scientist, studying this communication could help to understand the functioning of the organism and also how diseases arise. 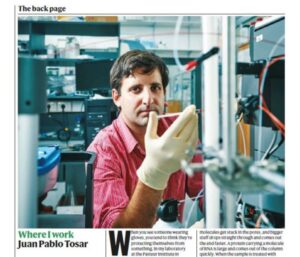 For example, it is known that tumor cells release specific RNA, so if their presence is detected in blood or urine, these molecules could function as biomarkers of the disease. This knowledge could help the development of liquid biospies —as blood and urine tests are called— to non-invasively detect molecules associates with diseases and thus make an early diagnosis.

A solution in the heat of the moment

Finally, in a year marked by the pandemic, Gonzalo Moratorio, head of the Experimental Evolution of Viruses Laboratory at IP Montevideo, was named as the only Latin American in ‘Nature’s 10’ of 2020. This is a list made by the magazine that every December mentions ten researchers from all over the world who made significant contributions to science.

Together with his colleague Pilar Moreno, their team developed a local molecular diagnostic test for COVID-19 using the RT-PCR technique. This trial, carried out in the country and at an affordable cost, helped Uruguay maintain a growing testing capacity and become independent from the importation of these products, which were scarce and expensive due to the high global demand. 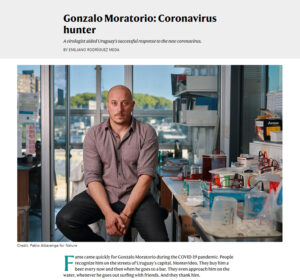 In addition, this team of researchers led the training and creation of a network of public laboratories that collaborated with the Uruguayan Ministry of Public Health and expanded the testing points in Uruguay, allowing access to COVID-19 diagnosis throughout the national territory. This network of laboratories, using the test developed locally, dealt with the 40 % of the daily tests that were carried out in the country during 2020. 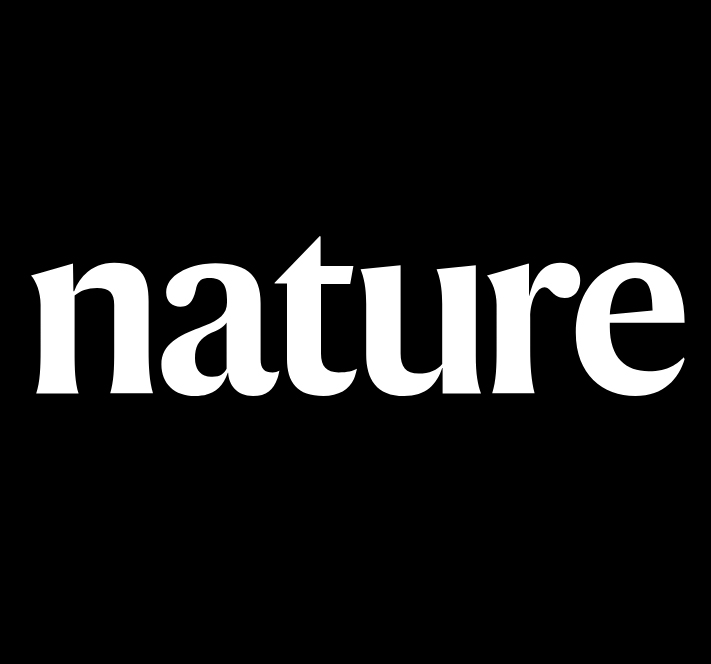